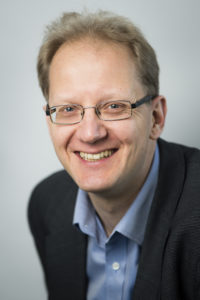 The ALD Innovator award “For Original Work and Leadership in ALD” will be presented on Monday prior to the Plenary Lectures.

After starting in 1991, Mikko Ritala has spent nearly 30 years in ALD research. His main research topic in ALD is development of new processes and precursors for thin films for microelectronics and other applications. Real time reaction mechanism studies form an important part of this research. Another research area is preparation of nanostructured materials by for example templating with ALD and electrodeposition, and electrospinning and electroblowing of nanofibres. Mikko Ritala has supervised 30 PhDs, published 500 papers (h-index = 70) and holds several key patents. In 2007 he was nominated as ISI Highly Cited Author in the field of materials science, and in 2010 he received Alfred Kordelin Foundation award. He has given numerous invited talks in international conferences. He started the American Vacuum Society’s short course on Atomic Layer Deposition and has given tutorials on the same topic also in other occasions. Mikko Ritala has participated in organization of numerous international conferences, including the AVS ALD conference series from its very beginning. He chaired the ALD 2004 meeting in Helsinki that combined the AVS-ALD and Baltic ALD (BALD) conferences, and he is prepared to repeat the same in 2024.

The success of ALD is built on chemistry. Whenever one wants to exploit the unique benefits of ALD with a new thin film material, proper precursors fulfilling the ALD criteria must be found for that material. Often new chemistry needs to be developed for also those materials that have already earlier been deposited by ALD because the existing processes are not compatible with the new application. The connection works also the other way: once a new material is added to the ALD portfolio, it may be exploited in also applications other than that originally developed for. This talk will make an overview of development of ALD chemistry from the past to the future. Through selected examples it will be shown how innovations in precursor chemistry have been made and how they have enabled to start to explore and exploit ALD in new applications. Challenges and opportunities ahead for the ALD chemistry development and research will also be discussed.

ALD processes consist of two or more precursors. Accordingly, breakthroughs have been made through metal precursors, non-metal precursors, and the ways how these are combined. Examples of all three will be given. While finding and testing precursors that deposit the desired film is the first, most important and experimentally relatively straightforward step in ALD chemistry research, the following steps toward comprehensive understanding on how the chemistry actually works are much more challenging and rarely fully complete. Examples of successful reaction mechanism studies with quartz crystal microbalance and quadrupole mass spectrometer under representative process conditions will be presented along the talk.

ALD student awards have been established to recognize outstanding research performed by a graduate student in areas of interest to Atomic Layer Deposition. All Student Awards will be presented on Wednesday during the closing remarks.

The ALD Best Student Paper Award winner will be selected on the basis of the oral presentation, considering quality of research and clarity of presentation. The award is sponsored by Lam Research and consists of a $1,000 cash prize and a certificate.

In addition, several ALD Student Poster Awards will be presented on Wednesday during the closing remarks. All accepted student poster abstracts are eligible.

This year there will be a $500 Poster Award sponsored by Coatings (ISSN 2079-6412), an international, peer-reviewed and open access journal devoted to the science and engineering of coatings, thin and thick films, surfaces and interfaces. We aim to help researchers present their cutting-edge findings and opinions in detail and have quick dissemination among their peers. Original articles, reviews, communications, conference reports and short notes are all welcome. Coatings is covered by leading indexing services, including Science Citation Index Expanded (Web of Science), Scopus, Inspec (IET) and other relevant databases. The Impact Factor (IF) for the year 2018 is 2.330. All the attendees in the ALD 2020 can enjoy a 20% discount on article processing charges as well as other benefits. Contact the Editorial office for article processing discount details.

Journal of Vacuum Science & Technology A (JVST A) has been publishing articles originating from the ALD Conference since 2010 as a Special Collection and will continue to do so each year. A JVST A Best ALD Paper Award has been established to recognize an outstanding article contributed to the JVST A ALD Special Collection. Each year JVST A Editors will select the winning paper from the articles published in the most recent ALD Special Collection. Eligible papers will include at least one author who participated in the ALD Conference. Authors on the winning paper will share a $1,000 cash award and each of them will be presented with a certificate acknowledging their exceptional accomplishment. The winning paper will be made freely available for a period of two years and widely promoted via email and on social and professional networks. JVST A does not have page or publication charges and is the flagship journal of AVS, a nonprofit professional society.

ALE student awards have been established to recognize outstanding research performed by a graduate student in areas of interest to Atomic Layer Etching.

In addition, several ALE Student Poster Awards will be presented on Wednesday during the closing remarks. All accepted student poster abstracts are eligible.